Please refer to my previous post which is reblogged from my friend Clanmother’s post The Philosopher who loved numbers.  When I saw her picture, I asked her when and where she took this picture.  She told me it was taken in May, 2011 at the Acropolis.  I said, I visited the same site in April, 2011 and took some pictures (see the above).  Do you see the difference?  Clanmother’s picture has six maidens, and mine has only five.

Please also check out my other blog, Exploring Turkey and Greece, the same picture taken by my friend Link also depicts five maidens instead of six.

Please look at these three pictures closely which will open up in the gallery if you click on any of them:

This is what I wrote on the post “Where is the missing Maiden?” in Exploring Turkey and Greece:

The Porch of the Caryatids–The famous “Porch of the Maidens” with six draped female figures as supporting columns, is missing one, which is now in the British Museum.  These five shown in this picture are copies only. The original five are now in the Acropolis Museum. The Greeks hope that  the sixth missing maiden would eventually be reunited with the rest in the Acropolis.

I am re-visiting this subject because of Clanmother’s recent post.  both of us are very curious.  I took that picture in April, 2011, and Clanmother in May, 2011.  There is one more maiden in one month.  There are a few possibilities:

1. Perhaps there is another site that exhibits 6 maidens instead of 5?

2. Perhaps, the last maiden has been reunited finally in Greece?  If that’s the case, it is a piece of big news.

3. Perhaps the Greeks installed the sixth maiden in May, 2011 to remind the British to give it back to the Greeks.

I am posting this big question mark here, and hope someone will enlighten us.  I hope to hear from you, my dear readers.  When I searched for similar images in the internet, there are both 5 and 6 maidens pictures.  Take a look yourselves and let me know.

To my readers:  My friend Clanmother solved the mystery.  Here’s her response to me:

“I solved the mystery. Check on my post for April 29th and you will see that I have another photo of the “Maidens” taken from a different angle. From this perspective is seems that one is missing; rather is it hidden by one of the maidens in front of it.

Please see her picture here.  Her previous picture looks like there is another maid hidden on the left.  But this picture has exactly the same angle as mine and my friend’s picture. 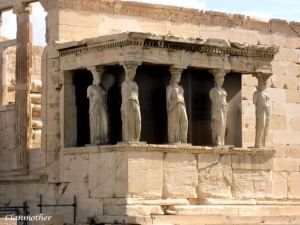